TELESCAPADE: “Make the invisible visible and the inaccessible accessible”

1. PROJET BACKGROUND – The concept of “making the inaccessible, accessible and the invisible, visible” has its origins on our practice of scuba diving in La Jolla, California. It followed the introduction of the Macintosh personal computer in the middle of the 80s and our feeling that by associating scuba divers and digital technologies, the undersea will become accessible to all. We then approached the PADI, the world’s largest association of professional diving instructors that were quite interested by the idea and encouraged us to develop the concept. But our University courses and our return to Europe delayed such development.

In the beginning of 2000s, after project incubation in Marseilles where we interfaced with the scuba diving industry, we created the company VirtualDive with the objective of developing a digital alternative to scuba diving based on a submersible console named Tryton of which a demonstration prototype was then produced and tested in pools. The concept of virtual diving was born. “I am swimming in a pool and virtually diving in a distant underwater site”.

On this basis we developed further the diving simulator associating an underwater game content named “Searching for the Nautilus” with financial participation of the PACA region.

An R&D programme was then implemented, named Digital Ocean. This programme was funded by the French Agency for Research (ANR), by the European Commission (2010-2013), by two other French Regions and by the Banque Publique d’Investissement (BPI). In these programme we had 10 partners – research laboratories and specialty SMEs, from France, Italy, Portugal, Finland and Switzerland and we registered eight patents in France.

As a result of this R&D programme we produced pre-industrial prototypes of a new diving simulator, named Dolphyn, which was tested with success in pools, in beaches and in the sea. In particular the Dolphyn was quite appreciated by handicapped children.

We approached numerous Business Angels, Venture Capital, banks, crowdfunders… in France and internationally, without much success. The conclusion was “people are not interested by oceans”. As a consequence, in 2019, at the beginning of the Covid crisis, we decided to pivot the project.  The objective became “ making inaccessible outdoors, accessible, in real-time and interactively” and the project was named Telescapade. And because nursing homes were the first victims of the pandemic, seniors became our priority audience.

2. TELESCAPADE V1 – The technology readiness level (TRL) of the project is at present at TRL9 – “System Test, Launch and Operations” for the applications targeting the market of nursing and care homes. Three launching demonstrations have been accomplished successfully associating nursing homes in the Yvelines Region (West of Paris) with the craftsmanship of a traditional cookies factory, with Claude Monet’s Giverny Gardens and with the Beauval Zoo. The slide presentation in annexe covers in detail this initial version of Telescapade.

Our marketing strategy is to target initially the French market of nursing homes starting with the Paris-Ile de France region. It concerns some 700.000 people living in 7200 nursing homes, named EHPAD. These homes are organized in networks either through their ownership or through associations.

More generally, in this sector of the market, Telescapade V1 shall interest 65 years old or older seniors, who are facing the challenges of loneliness, lack of social interactions and an aggravating quality of life.  There are 13.7 million of them in France and 110 million in Europe. They represent today one fourth of the population. These numbers are growing and their situation, post-Covid, is worsening.

One key element of the project is “the guide” that generate, in the site and in movement, the content that the audience receives.  He has specific knowledge in the sector concerned by the event and assures the link between VirtualDive’s web operator and the users. He may be a retired person, a free lancer or a subcontractor. There are presently 162 million free lancers in Europe specialized in every sector of the market. They constitute a formidable resource of information and expertise, not only for the elderly but also for the society, in general, and for the youngsters in particular. They will be the initial and main source of crowdsourcing of the project. These professionals with an up-to-date expertise will assure the feedback from the users and a constant actualization of the offer to comply with the evolution of the demand.

3. TELESCAPADE – The project has a much wider scope of action than the linking of seniors with the external world. If the version of Telescapade V1 for the seniors is at TRL9, the overall project that covers “indoors, outdoors and underwater” environments is presently at TRL 8. It means that tests and demonstrations are completed, proving that operating technology reached its final shape and that it remains to demonstrate that the system performs under a quite diverse market environment with specific constraints of connectivity and interactions.

The extension of the project to underwater applications is supported by the detailed programme of R&D developed by Virtualdive in the past, more specifically, by the project Digital Ocean and by the knowledge acquired with the production and operation of the simulator Dolphyn.

More recently, in August 2021, VirtualDive developed and tested for the project PAREO, financed by the Research Institute for Sustainable Development (IDR) a new system named OceanStreamer that allows a diver, diving in coral reef environments, to communicate with the internet users – sending real-time images and receiving and sending real-time speech.  The project PAREO associates the islands of La Reunion, Maurice and Seychelles with the goal to develop the awareness of their school children to the protection and conservation of their coral reefs. The successful test constitutes a world’s first.

The integration of underwater activities in Telescapade opens a vast field of new activities that covers rivers, lakes, the littoral and the undersea. It has immediate applications in the observation, study and protection of marine biodiversity. It may allow reducing the marine and coastal pollution. It will change profoundly the perception that young generations have of the ocean and of its biodiversity. Finally, it may constitute a unique system that allows viewing our planet as a whole, one third of land and two thirds of ocean, with no walls between them.

4. OVERALL VIEW – This project description is completed with one slide presentation included in the annexed project file. This presentation concerns the project Telescapade V1 that targets not only the nursing and care homes, presently being introduced in the French market but also the underwater version. 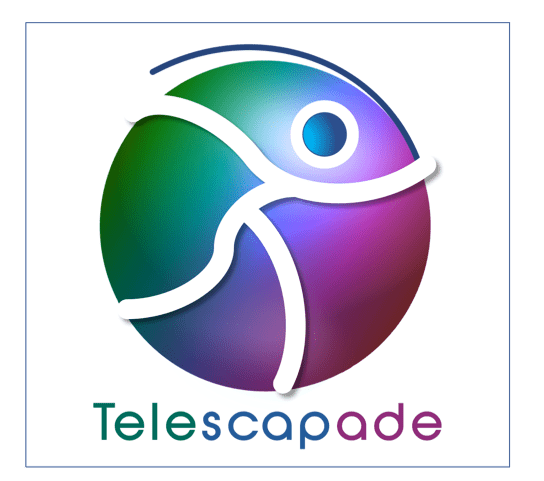