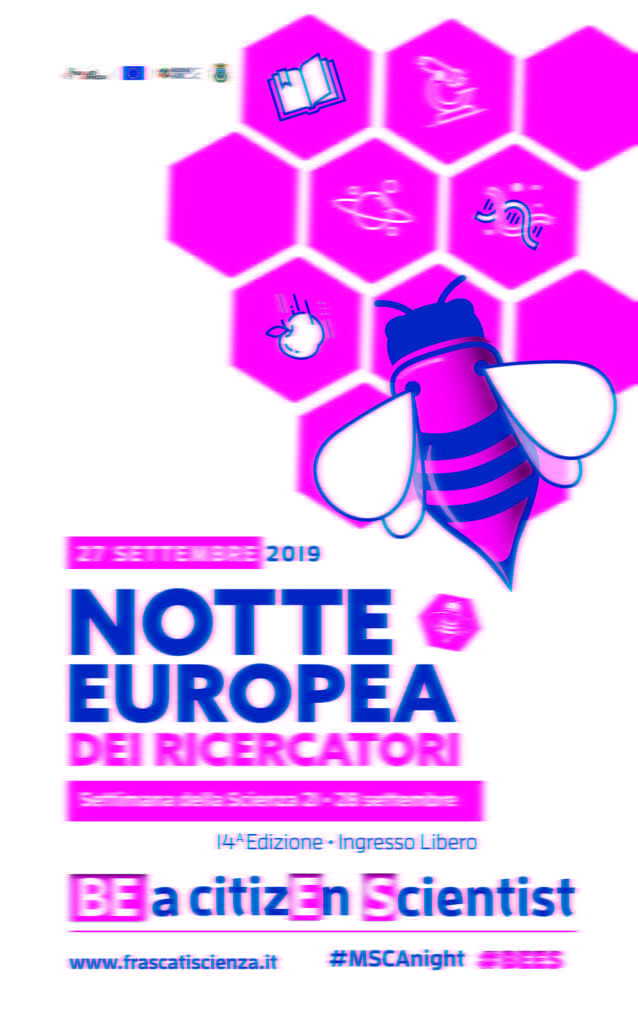 European Researchers’ Night 2018/2019 is a European project coordinated by Frascati Scienza with the aim to communicate to society the importance of science, reducing the stereotypes about researchers and their profession and increasing, in the long term, the number of young people taking up research careers. In order to communicate these messages to the general public, “BE a citizEn Scientist” (BEES) was the slogan of the project. The acronym BEES suggest a collaborative society where citizens work together with researchers taking an active part on discussions and research itself. Approximately 70.000 people participated to more than 700 events organized in 34 Italian cities, involving more than 1500 researchers in the organization. In the two-years period, the awareness campaign reached in Italy more than 60 million people making aware of the Researchers' Night and its objectives, using offline (TV and print media) and online (social, website, ads, email and newsletter) communication.

Citizens and researchers were the main actors of the BEES project. Participative and inclusive events (world cafes, trivia nights, discussion games, etc.) were planned directly involving people in research, thus transforming them from citizens to citizen scientists. In order to convey the message to the public at large, specific activities will be developed to involve different kind of public, looking at Edutainment, to reach kids and youth through Hands-on activities, science games and shows; Spectacular and informal style, to reach adults and curious attendees with guided tours inside the labs and outside the research centers, exhibitions, science shows and parties; Participative and inclusive style, to reach young and adults, not only science-addicted people, in order to deeply involve them in the discovery process.

Frascati Scienza has conducted a comprehensive survey about impacts and results achieved during the events, collecting more than 2000 questionnaires, obtaining an exhaustive feedback on the general public. The survey showed that the project had a general positive impact on public image of researchers and their job, on the importance of science and its potential impact on citizens' daily lives, on the interest expressed by young people for scientific careers, on the increased awareness among the general public of the importance of research and innovation and more favourable general attitude towards its funding. The event was also useful to strengthen the collaboration among the various research institutes involved during the events, tightening contacts for future common projects. Finally, the goal of encouraging the dialogue between researchers and other citizens and raising awareness about researchers’ work was achieved.