Being Bold in Crowdsourcing

It’s easy to forget that the Internet was once all open. Rather, the Internet has been in a continuous cycle of highly-structured portals and free-flowing information. The initial platforms, like BBS boards, gave way to walled gardens like America OnLine. AOL’s drop in popularity lead to an open field again, and the last decade brought Facebook, Twitter, and other highly-structured platforms back again.

It’s also easy to forget that the word “crowdsourcing” didn’t have to be used since everything – from our interactions with others to the exchange of information – was from the crowd.

So it makes sense that Crowdscouring Week would join forces with H-FARM to create  next month’s first-annual BOLD Awards: a partnership with the world at large to celebrate the wisest, most-applicable innovations worldwide. The best way to understand the future is to, in a sense, go back to the purest form of engagement.

We can go forward by listening.

Crowdsourcing is a process of leaning on the public to strategize your next move. The project-focused platform Mathesia is one of the strongest examples today. Mathesia wants to solve the world’s problems using math as the foundation. Projects on Mathesia are business challenges solved by means of Applied Mathematics, Statistics and Data Science. What is distinctive is the different criteria required to get involved: everyone can participate.

The shift here cannot be overstated. As we shared recently:

In the past, the same concept would have been done all in-house. Startups and small businesses would have little-to-no access to high-caliber mathematical experts. Skilled mathematicians would be rarely utilized unless they had a high-profile position or several letters behind their name. And the two groups would have a difficult, if not impossible time being connected together, as would startups with established mathematicians or established businesses with novice mathematicians. Businesses like Mathesia not only stand out because they utilize the crowd for delight, but they wouldn’t exist without the crowd.

In one instance, an energy trading company wants to help maximize resources. The key is creating algorithms based on weather patterns as well as consumption statistics from customers worldwide. Instead of looking inward, the organization is opening up opportunities to outside parties. The project has a two month deadline for up to 15,000 euros to be awarded to the best submissions.

Second, another party wants to optimize airline ticket seat sales. There is a classic airline adage: the person next to you may have spent twice as much as you did for the same exact seat and experience, but unless you talk, you’d never know. The widely varying prices do have a pattern, but this project wants to make the mathematics even tighter. The biggest concern, it says, is the third-party online travel agencies (OTAs) offering deep discounts and, arguably, wielding more power than the airlines themselves. By creating a smarter algorithm, airlines could attract more travelers to buy directly from them. The deadline and reward will be announced soon.

Lastly, a recently completed project helped a major Italian hospital. The orthopedic organization needed to optimize the time in the operating room. The criteria was varied, including maximizing the billing to cost ratio, reducing the probability of or activity after planned closing time and using as much as possible of the allocated time during the day. Math would not only be crucial to success, but it would be hard to imagine any success without it. The hospital offered up to 2,000 euros for the preliminary work, with more budget available after a successful start. The end result was an 18% increase in the time that the operatng room is used.

The three projects all reflect the strengths of crowdsourcing. First, it is a rare opportunity for outsiders to build a reputation working with potentially powerful organizations. Second, it gives organizations fresh ideas outside of their culture since, by their very nature, businesses innovation get stagnant over time. Third, it is a reputational, if not a financially rewarding path, not based on degrees, social network or status, but on actual results.

Mathesia is a natural fit for the first-annual BOLD Awards, happening April 5th in Venice, Italy, and the platform is sponsoring the Boldest Crowdsourced Online Platform category.  Here is a link to the final five nominees in this category.

Crowdsourcing is a great equalizer, diversifying the people able to contribute their ideas. It also is a great necessity. We have the opportunity to make our future brighter than ever by leveraging today’s technology, networking and accessibility tools to broaden our landscape. The term “crowdsourcing” may be mainstream today, but we remain far from harnessing its true power.

Everyone attending the BOLD Awards ceremony on the evening of April 5, at the H-FARM campus, will gain an insight to the unique workings of this special and stimulating startup accelerator set in beautiful countryside just outside of Venice, Italy. Attendees at the black-tie gala dinner will include the BOLD Awards winners, category sponsors who will be presenting awards, the H-FARM and CSW event teams, along with some of our corporate supporters and investors. Some tickets remain available if you’d like to apply to spend an evening in the company of this select group of BOLDEST people and organizations who are spearheading breakthroughs in the crowdsourcing and many other sectors. 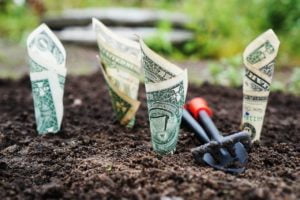 A BOLD New Asset Class, For The Masses 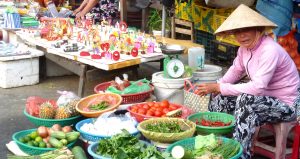 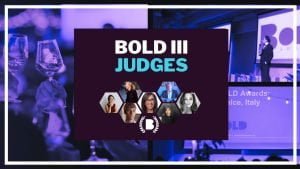