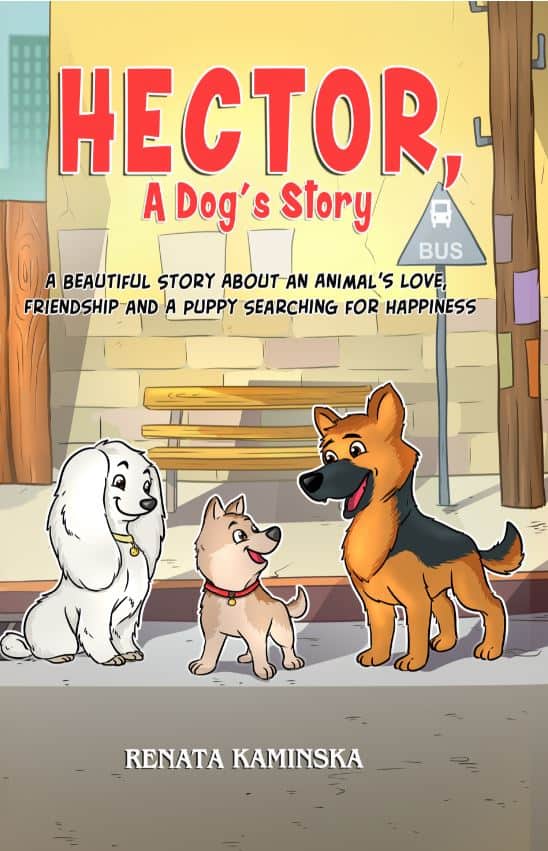 Kamreno ltd is aiming in publishing educational books for children and adult dog lovers. The author & owner of company, Renata Kaminska since she was, 12, dreamed of publishing her own novel to raise money for dog foundations. She believes that dogs, like people, have personalities and feelings and that it’s important teaching children empathy & kindness with animals and spark curiosity in reading.

In her opinion education is crucial in building our future and society. It is a powerful drive of change, and improves health and livelihoods, contributes to social stability and drives long-term economic growth.

That’s why she believes that her books have tremendous educational value and would make a great addition to children’s education despite the age, culture or background.

The first book – Hector, A Dog’s Story passes taboo of difficult topics in children literacy and presents world through animals’ eyes. (Reviews link). There was over 30 publications about the book in UK & international press. It was featured e.g. in UK’s Dog Magazine, Westminster Children’s University, Robin Age, Australian Dog Lover and few more. It’s also part of dog mentoring program at some London’s schools. Her book also deals with difficult topics in children’s literature, including death, god, loss, friendship and abandonment which very often are taboo for parents.

Although the book was self – published thanks to crowd-funding, she managed to gather readers in as many as 16 countries on 5 continents, which makes her extremely happy and emphasizes the universality of the story. The book and the initiative was supported by 11 organizations, including 7 charity foundations (e.g. in UK, Poland, India), both for children and animals. Profits from the sale will go straight to foundations supporting our furry friends and the children who adore them.

In addition, Renata engaged people from all over the world in the preparation of the project, e.g. USA, Bangladesh, Moldova, India, England, Sri Lanka, Pakistan, Singapore and Poland.

In a nutshell, it is a story about a love, friendship and a puppy named Hector, looking for happiness compared to the grey reality of the Second World War. It is a story that proves that hope never dies and that happiness awaits everyone.

During the process of creation, Renata consulted psychologists and gathered feedback and insights from parents and children, as well as animal lovers of all kinds. To finalize the first book, Renata worked with well-known (extremely helpful) editor, Mary Kole.

Renata also conducts workshops with children in English and Polish schools as part of dog mentoring. The first book Hector, A Dog’s Story partners with Westminster Children’s University. In mid- January will be published second book Hector and the Time Machine. In the second book, the dog Hector travels to different countries in 2020. Hector in his journey around the world is an observer of important events and phenomena, including the pandemic, climate change, Brexit, multiculturalism, etc. As a child asks questions and seeks answers to understand the complexity of the world, its history, different cultures, etc. It helps parents to engage in conversations with their child on difficult topics based on their own system of values and knowledge. Hector, like a child, does not judge, but only asks questions.

Hector’s story is a journey into the unknown, full of turmoil and adventures, and an attempt to understand the world around us. It is a story about human values, contemporary problems and multiculturalism that we will face throughout our lives. It is a book that teaches respect, tolerance and love. This is the story of us as humans through the eyes of a dog.

Renata believes that developing empathy from the youngest age is very important. That’s why additionally to partnering with Westminster Children’s University in mentoring program she plans further co-operations with companies and educational organisations.

Her third and fourth books will explore further ecology and wellness among children.

The project won’t start with crowd-founding. Thanks to organised crowd-founding in July via Facebook and Just Giving portals. The project was supported by over 60 people from around the world and enable design cover, illustrations for the book and later on also prepare website and promotional materials such as website, promo video, advertising etc.

The supporters of the project not only support the project financially but also participate in process of creating  the cover and research related to title and gadgets attached with book.